Christianity tells us we have original and actual sin, and Buddhism tells us everything is in our minds and that what we hold in our minds is karma.

All religions tell us to cleanse and empty our minds, but this is often misunderstood. People commonly think that what is meant by this is to abandon or give up what they intended to do.

The human mind is the way one is living at present. 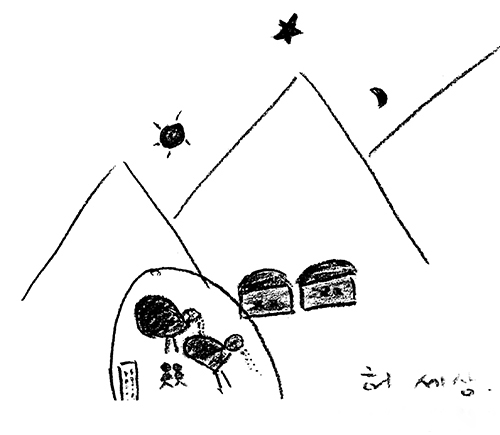 The experiences of your life become the foundation on which your individual mind is formed.

The human mind is like a video. This means man lives his life in an illusion from birth. It is comparable to a video because with his eyes, ears, nose, mouth and body - his five senses - he takes pictures of all that he experiences as he lives, and stores them inside him. These become his "self" and they dictate how he lives and behaves.

As man lives out his life within this mind - this "film" - he takes pictures of his hometown, his elementary, middle and high schools, college, military service, marriage, career and religious life; not only has he taken pictures in his mind of his entire past, but he will continue to do so even in the future of all that he sees, hears, speaks, smells and feels.

For example, anyone who has been to Miami Beach will have an image of Miami in his mind. Man's mind is exactly the same as a camera - the images on film in the camera are not real; they are false. The actual Miami Beach is what is real. What is inside the mind is false - they are like images on a reel of film.

It is because man is living inside a video that all religions tell us to cleanse and empty our minds; it is why we are told that the blessed are the poor in spirit for the kingdom of heaven is theirs. Man has always lived inside this mind, this film, and he has never once seen or lived in the complete world. This is what sin is; what karma is.

Your whole life, including everything that happened today, was simultaneously taken as a picture the moment you saw it. Moreover you are inside that film, the picture. When you think carefully about your day today, wasn't it all inside your mind?

We can live as one with the complete world when we destroy this picture world and come out from within it. We can become complete when we are resurrected after becoming one with the world created by the Creator who is complete. Thus, the mind that we must cleanse and empty is the world of pictures.

Only man is dead for he lives in a picture world. Man's mind is a mind world that is like a self-made video - a false world and an illusion. When seen from the real world, it is non-existent and when a person who is within this mind world dies, he disappears forever. However, man believes he is living in the actual world because his mind world overlaps the real world.

Man is not complete because he lives in a human mind world of the life that he has lived - a mind world constructed from pictures that were taken of the real world. This is the reason people seek religions and spiritual places - the reason they practice this meditation. Man and his mind are false.